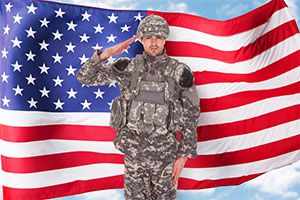 Since 1862, the naturalization laws have provided special benefits for noncitizens who performed specified service in the U.S. armed forces.

The benefits of this statute are available to any person who has served in the U.S. armed forces at any time for a period or periods totaling three years,covers all branches of military service, whether in the Army, Navy, Air Force, Marines, Coast Guard, or a National Guard organization recognized as a component of the armed forces of the United States. The applicant must have served honorably in the armed forces for the requisite period and, if separated from such service, must never have been separated except under honorable conditions. One who has received an undesirable discharge obviously has not served honorably. Moreover, one who has procured relief or discharge from military service on the ground that he is a noncitizen is expressly disqualified from becoming a citizen of the United States except under special circumstances. The applicant must have been lawfully admitted to the United States for permanent residence. The naturalization application must be filed while the petitioner is still in the service or within six months after the termination of such service. A person who applies for naturalization under this subsection must comply with all requirements of the naturalization laws, both substantive and procedural, with the following exceptions:

Persons With Active-Duty Military Service During Specified Periods of Hostilities

He has served, while he was an alien or a noncitizen national, in the U.S. armed forces during one of the following periods:

On October 1, 1991, the President signed the Armed Forces Immigration Adjustment Act granting special immigrant status to noncitizens who have served honorably or are enlisted to serve in the military for at least 12 years. The Act benefits primarily about 3,000 Filipino sailors in the U.S. Navy.

A 1990 statute authorized the posthumous grant of U.S. citizenship to an alien or noncitizen national who dies as a result of injury or disease incurred in or aggravated by active-duty service in the U.S. armed forces during certain specified armed conflicts. Another 1990 enactment provides for the grant of naturalization benefits to Filipinos who served in the Philippine Army or in other Philippine forces under command of the U.S. armed forces during World War II. Such military service must have been honorable, and if the applicant was separated from the service, he or she must have been separated under honorable conditions. The law specifies that the executive department under which the service was performed determines and certifies whether it was honorable and in active-duty status and whether separation from such service was under honorable conditions. Unlike the statute discussed above, the statutory provisions dealt with here do not explicitly state that such executive determinations and certifications are conclusive, but it is clear that this was intended and that the executive certification is the exclusive method of proving the nature of the service.

A person who applies for naturalization under this subsection must comply with all requirements of the naturalization laws, both substantive and procedural, with the following modifications:

The Posthumous Citizens for Active Duty Service Act of 1989 provided for the granting of posthumous citizenship at the time of death to a person meeting the requirements listed below if the Attorney General approves such a request made under specific circumstances specified in this statute. The deceased must meet the following requirements:

A request for posthumous citizenship for an eligible person may be filed only by the next of kin or representative of the deceased (both terms to be defined by the Attorney General), and such request shall be approved for a person if:

When such a request for posthumous citizenship is approved, the Attorney General shall send to the individual filing the request a document stating that the U.S. considers the person to have been a citizen of the U.S. at the time of the person’s death.