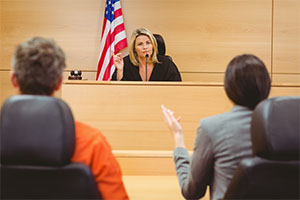 Any criminal conviction can result in a prison sentence. Whether prison will be part of the sentence, the length of any prison term, and when parole will be available will all depend on a number of factors. The first factor in the determination is the nature of the crime. New Jersey divides violations of criminal statutes into six categories, which are, First, Second, Third and Fourth Degree Crimes and Disorderly Persons Offenses, and Petty Disorderly Persons Offenses (from most to least serious). The second factor is a balancing of what are called aggravating and mitigating factors (that is, factors that make the crime more or less serious). Examples of aggravating and mitigating factors are below:

The first question is whether or not there will be any prison term as part of the sentence. If it is a first offense and a 3rd or 4th degree crime, or a disorderly persons offense of either type, there is a presumption that there will be no prison sentence. There are exceptions to that presumption for certain crimes, including theft of a motor vehicle, for example. Conversely, if the conviction is for a 1st or 2nd degree crime, there is a presumption that there will be a prison sentence, which can be avoided only if the judge determines that imprisonment of the defendant would be a "serious injustice." There are also rules for specific crimes. For example, a second theft of a motor vehicle means a presumption of prison.

The length of a prison term is also a product of those factors plus exceptions for particular crimes or circumstances. The general rule for different levels of criminal convictions is below.

The aggravating and mitigating factors play a large part in whether a defendant is sentenced to the low end, middle or high end of the range of sentences available to the judge.

Another element in any prison sentence is eligibility for parole. Some crimes include a minimum period or portion of the prison term during which the prisoner cannot be paroled, they include certain offenses committed using or possessing a firearm, death by auto when the defendant was under the influence of alcohol or drugs, second and subsequent sex offenses, and distribution of drugs on or near school property. For other offenses for which there is no statutory minimum period without parole, the sentencing judge may set such a minimum if the judge is clearly convinced that the aggravating factors substantially outweigh the mitigating factors.

As you can see even from this brief discussion, the law relating to sentences of prison terms is complicated and involves the interaction of a number of different statutes before the sentence is determined. You have an opportunity to affect the sentence issued through submissions to and discussions with the probation department, the office of the prosecutor and the court. To make the most of those opportunities, you must be able to present the law and the options available to those parties in your particular case. You need knowledgeable counsel to craft those arguments and present them.