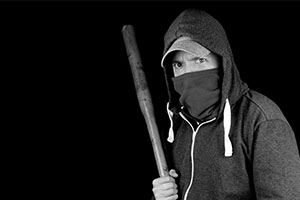 In New Jersey, an act of terror is defined as any threat or action intended to inflict terror on another. Even the threat of death or severe beating is a terroristic threat in New Jersey governed under N.J.S.A 2C:12-3. This kind of crime is very prevalent with domestic violence and fights among couples where one threatens the other. While not as heinous as normal terrorism, terroristic threats can have harsh consequences.

If a person threatens to commit any crime with the purpose of terrorizing another, he is guilty of a crime of the third degree, punishable by 3 to 5 years in prison. This requires the threat to be a serious one and that the intention was to psychologically torment the victim. Similarly, a second subsection of the statute is that it is a crime of the third degree if one were to threaten to kill another with the purpose of putting the victim in immediate fear of death. It also must be proved by the State that it was reasonable to assume that an ordinary person would feel immediately threatened and likely to think it would be carried out.

If the defendant has the means to carry out such a threat immediately, such as a deadly weapon in his hand, than this falls under the second subsection involving the threat to kill. If the defendant does not have a weapon or is not close to the victim but still makes threats intended to inspire fear in the victim, then he is guilty of making a terroristic threat under the first subsection. In the context of a domestic violence dispute, a jury can reasonably assume that previous domestic abuse warrants the belief of the victim that the threats were legitimate.

In State v. Conklin, 394 N.J. Super. 408, the defendant was accused of making death threats towards the victim and her daughter, inspiring terror in the victim. These threats were intended to promote fear in the mind of the victim, which constitutes a crime of the third degree.

An indictment of terroristic threats will merge with a conviction of a higher grade offense. For example, if a person commits a first degree offense in conjunction with making terroristic threats, the threats are considered a lesser charge and the defendant will not be penalized separately for each offense.

If you have any questions regarding this statute please feel free to contact LS&P Lawyers for help. We are available 24/7 for free consultation and have an experienced team of criminal lawyers willing to meet your legal needs.