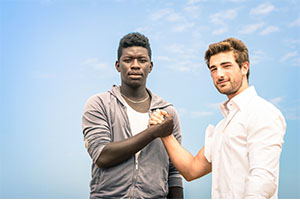 On June 15, 2012, the Obama administration announced that young immigrants may apply for deferred action, which allows them to obtain employment authorization (work permits) valid for a period of two years, with an option for renewal for another two years. Deferred action may be granted to immigrants currently in deportation proceedings or who have never been in deportation proceedings. However, it is a form of temporary relief only; it does not grant an individual citizenship or permanent resident status. In addition, deferred action is discretionary and decided on a case by case basis.

Who is Eligible for DACA?

To be eligible for deferred action, an applicant must:

How to Apply for DACA

USCIS will be introducing a new Form I-821D, Consideration of Deferred Action for Childhood Arrivals, in May 2014. This form will be used for both initial and renewal requests for deferred action.

To qualify for deferred action, applicants must provide documentation proving that they meet the eligibility requirements. Such documentation includes, but is not limited to: birth certificate; passport from the country of origin; school or military ID; school records from U.S. schools attended; medical records; utility bills; birth certificates of any children born in the United States; deeds or mortgages; tax returns; school transcripts; U.S. high school diploma or GED certificate; and military personnel records.

Because it is a new initiative, many potential applicants have questions regarding the DACA process. If you are an individual seeking more information about DACA, please contact our office. The New Jersey immigration lawyers at LS&P Lawyers are here to help you.