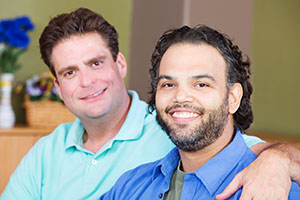 Following the U.S. Supreme Court ruling that the Defense of Marriage Act (DOMA) was unconstitutional, gay and lesbian couples are now granted the same rights and privileges as heterosexual couples under U.S. immigration law. This means a U.S. citizen may file an immigration petition on behalf of his or her spouse or fiancé, regardless of the foreign national’s gender or sexual orientation.

Only a few months after the Supreme Court’s historic decision, New Jersey legalized same-sex marriage within the state, further removing one of the barriers to gay and lesbian couples seeking a green card for a their spouses. Same sex marriages performed in New Jersey are now recognized as qualifying relationships for immigration benefits.

If you are a U.S. citizen and wish to sponsor your same-sex spouse or fiancé for a visa or green card, or if you are seeking to immigrate to the U.S., please do not hesitate to contact the New Jersey immigration lawyers at LS&P Lawyers.

What Immigration Benefits are Now Available to Same-Sex Spouses?

In order for a U.S. citizen to legally bring a same-sex foreign citizen spouse or fiancé(e) to the United States, the couple must file an I-130 petition, K-3 visa or a K-1 fiancé(e) visa. The requirements are no different for same-sex couples than heterosexual couples.

To help you or your spouse obtain legal residence in the U.S., speak with a knowledgeable immigration lawyer at LS&P Lawyers as soon as possible. Our reliable legal team works closely with each and every client to ensure that the paperwork and filing process runs smoothly from start to finish.

While the latest immigration laws have eliminated some of the challenges facing same-sex couples, obtaining a U.S. visa is still a complicated and lengthy process. A single mistake on an application or during the filing process can jeopardize your chance for starting a life together in the United States. Contact the immigration lawyers at LS&P Lawyers to discuss your circumstances today. We have years of experience handling immigration cases and will work tirelessly to ensure your rights as a same-sex couple are protected. Call (844) 288-7978 or submit a contact form online.