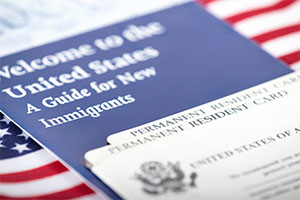 The sections that follow give a fairly detailed explanation of the process and its requirements. Obtaining a National Interest Waiver is not easy. We have thirty- six years of experience representing non-citizens in immigration proceedings. Take a moment to review this information. As always, our experience and expertise is available to you and we are available to assist if you have questions and need representation.

General requirements based on cases:

Many of the cases in which national interest waivers were approved were supported by affidavits from well-known, established and influential persons or organizations. For example, if submitting a national interest application for a scientist, it would be useful to obtain affidavits from leading scientist, representatives of scientific institutions, and from other organizations associated with the type of research to be pursued.

Documentation detailing past achievements that tend to show future benefits should also be submitted.

Documentation that the alien has already created jobs, turned around a business, or created an increase in exports or other economic improvements should be instrumental in gaining approval.

In addition, the argument must be made and substantiated that the alien's work will be of value to the United States. There should be a focus on the value of the alien's work to the United States, or even to a regional or local interest, such as an alien offering medical or legal services to an area in need of those services. Certain documentation could be used to support this argument, including studies showing a need for the type of services the alien will render; newspaper and/or magazine articles describing a need in the industry or area for the alien's type of services; or statistical surveys, preferably developed by an objective group, showing a need for the type of services the alien would provide.

Immigration expects that in a case where an applicant claims his work is in the national interest, substantial documentation from well-known US experts, established institutions and appropriate US governmental agencies would be readily available.

Do I Qualify for Waiver of Labor Certification?

Those seeking qualification for a waiver of labor certification based on services considered in the national interest must make a showing significantly above that to prove "prospective national benefit" required of all aliens seeking qualification as exceptional. It applies only to aliens who will substantially benefit prospectively the national economy, cultural or educational interests or welfare of the United States.

We highly recommend the submission of testimonial letters from substantial, recognized national or international organizations/institutes/ government agencies with the expertise to definitely say that the work or contribution of the individual truly is in the national interest. The authors of these third-party testimonial letters should clearly state how they came to be familiar with the alien's work.

Examples of some of the more common factors that tip the scales favorably:Call LS&P Lawyers Today

If you have any questions pertaining to the granting of a National Interest Waiver, feel free to contact us. We will be happy to set up a time for you to come into our office and provide a free consultation.