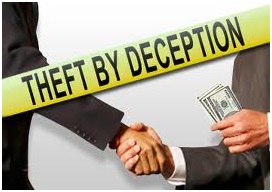 Theft by deception is defined as "[a person] purposely obtains property of another by deception." Commonly referred to as "conning," this is a very serious offense that has severe ramifications. If charged with this offense you should contact an experienced legal representative. LS&P Lawyers are available 24/7 for free consultation and has offices conveniently placed in New Jersey.

When proving theft by deception a prosecutor has to prove four elements of this crime:

Deception could mean a number of things. Creating a false impression of the law, value, or intent of something constitutes deception, such as one pretending he is donating funds to charity but in reality is keeping them to himself. This person misrepresented his purpose in collecting money, so he deceived anyone willing to give him money for charity. Similarly, if one promises to perform services for money and those services were not rendered, said person could be charged with this crime. However, puffing and exaggerations are not covered by this statute. For example if a salesman makes a statement regarding the quality of his merchandise, this is regarded as an opinion rather than a legally binding promise. So if your wife does not like the piece of jewelry you got her after the jeweler said she would, you cannot accuse him of theft by deception.

If you are facing these charges please contact LS&P Lawyers for a free consultation. Our experienced New Jersey theft defense lawyers will represent you to the best of their ability.