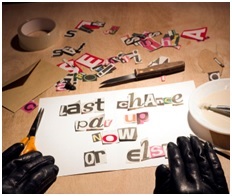 There are four elements to extortion: The defendant received property or money from the victim, the property was received as result of one of the previous threats mentioned, the threat was made in order to receive money or property, and the demand for property or money is illegitimate. The most important part of an extortion case is the initial threat to cause any number of the previous examples to occur if a certain payment is not met. Some of these examples are legal by themselves, like revealing an embarrassing story about the victim to a news source or testifying, but when accompanied by a demand for property or money in order to buy silence it becomes extortion.

Extortion has to be purposeful and unlawful; if the accused honestly claims the property as restitution for harm done or lawful compensation for services than this is not extortion. Extortion also differs from robbery by the lack of threats of immediate harm. Extortion requires a threat of future consequences if certain demands are not met. For example, in State v. McKiver, the victim was threatened with a gun and told if he did not pay $10,000 the next day he would be killed. Since this threat would be carried out at a later time it was considered extortion.

Extortion has very serious consequences. It is always a crime of the second degree accompanied by 5 to 10 years in prison and a maximum fine of $100,000. It is also under the No Early Release Act which means that the accused will face 85% of his prison sentence with no chance of parole.

If faced with these charges you should contact and experienced legal team immediately. The NJ theft defense lawyers at LS&P Lawyers have experience with these cases and are available 24/7 for consultation.